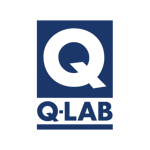 Company Overview
DSM Resins is a Netherlands-based manufacturer of polyester powder coatings for architectural applications. Their customers are principally in the building and construction industry. Naturally, the service environments they are most concerned about are outdoors encompassing all climates, weather conditions, and building structures.

In the 60 years that DSM has been producing powder coatings, they have carried out a lot of weathering testing, amassing more than 30 years of data. The primary degradation types that DSM are concerned about are colour change and gloss loss. Like many paints and coatings producers, their products are durable materials meant to last a long time – DSM evaluates and tests for color and gloss change over a period of approximately 10 years. DSM have a policy of performing accelerated testing of any new product developments, formulations, and changes prior to a decision being made to submit it to Florida to be added to the Outdoor Testing Programme. DSM sees weathering testing as a key component in their Product Development strategy. The library of data they have gathered allows them to offer a 10-year warranty. According to DSM, the most important benefit from this testing work is happy customers, which you can’t put a price on.

Problem Statement
The problem that DSM were experiencing stems from their purchase of three fluorescent UV chambers from a Q-Lab competitor. DSM was carrying out a test according to ASTM G154 (for >500 hours), with a Gloss Loss value of >50% representing their critical failure mode. This test was chosen as it is an internationally-recognized standard for architectural and steel coatings. DSM requires consistency and stability from their weathering results, as reputation is extremely important to them to earn for application recommendations. However, even though the three fluorescent UV testers are installed in the same laboratory and are only metres apart, they could not deliver Gloss Loss or Colour results that were stable, consistent, or comparable. The manufacturer’s repair representative spent a considerable amount of his own time over a three-year period attempting to get the testers to provide usable, stable, and consistent results, without success.

Testing Description and Results
The inconsistent performance of the competitive apparatuses gave Q-Lab an opportunity to work with DSM on a solution for their accelerated weathering testing needs. After the problems encountered with the competitive chambers, DSM asked our distributor for help. They wanted to purchase three UV fluorescent testers; however, after their previous experience they wanted to prove that QUV accelerated weathering testers would provide the stable, comparable and consistent results required that our competitor had failed to deliver.

Q-Lab agreed to run a 500 hour test using three QUV/se testers to verify that test results met DSM’s expectations. They provided two colours of samples for each QUV apparatus - a brown and a white. The expectation is that the darker colour will lose gloss faster than the lighter colour, with DSM providing an expectation for the amount of expected Gloss Loss and the timescale involved. We took three new QUV/se testers from our European warehouse, set them up in our European Accelerated Lab, and began the test.

During the test, we took regular evaluations of the test specimens and shared them with DSM. The result was that all three instruments provided results that not only fulfilled the criteria for providing comparable results between the three testers, but also fell within the time parameters laid down by DSM. The customer was pleased with the results and took delivery of the three QUV testers used during the work. The three graphs below show the repeatability of testing by the three apparatus. In each graph, the y-scale represents % gloss retention. The upper grouping of gray lines represent gloss measurements taken from white specimens; the lower grouping is from brown specimens. 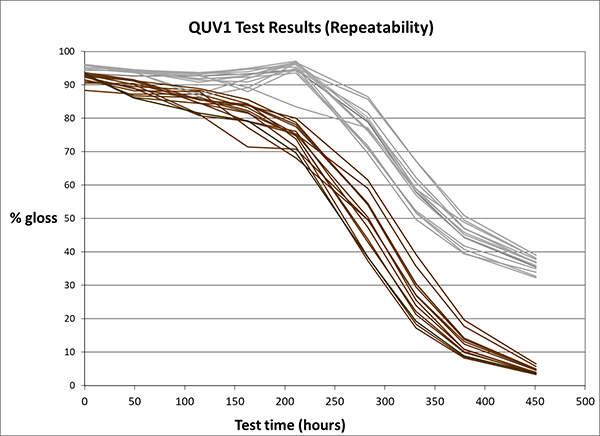 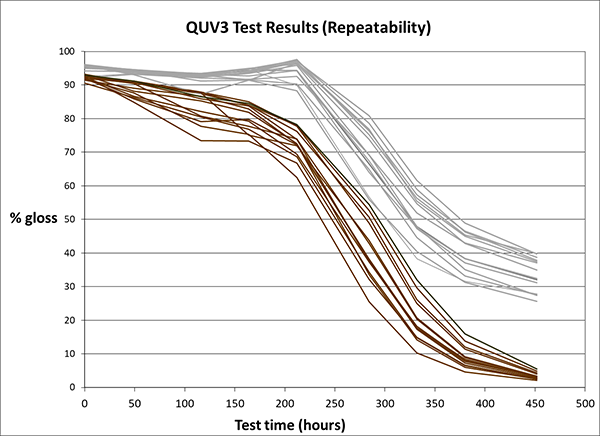 This final graph averages all white and all brown specimen measurements from each of the three QUV accelerated weathering testers (solid lines) as well as the overall average from all three testers (dashed lines) shown with error bars. This demonstrates the reproducibility of results observed among the three test instruments. 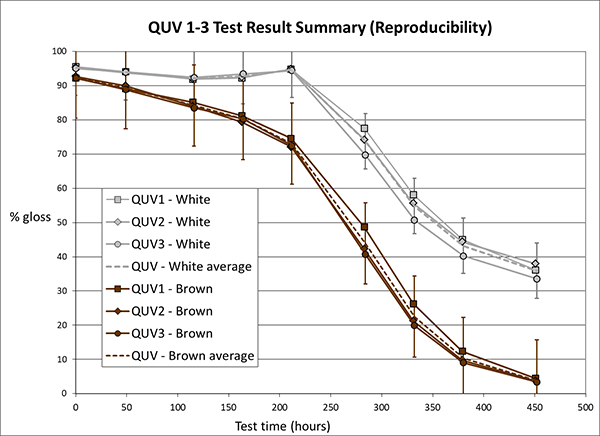 DSM Resins has been seeing consistent gloss and colour results from their QUV testers, as shown above. They have a high degree of confidence in their combined accelerated and outdoor test programme for new coatings developments. This approach to accelerated weathering testing is very much in line with a key way in which Q-Lab promotes accelerated weathering testing – as a tool for directional decision-making. The QUV testing allows them to quickly screen out new developments in the laboratory before spending the time to put them to the true test of outdoor weathering.

Since this test, DSM has gone on to purchase additional testers from Q-Lab such as the QUV/Spray/RP, two Q-SUN Xe-3-HS, and one Q-FOG CRH600. They are a very satisfied customer with Q-Lab and our distributor. This is because we listened to what they wanted, delivered what they needed and have become a good and trusted partner to work with.

DSM is a well-known and internationally recognized company who places a high value on using internationally recognized weathering testers such as the QUV to provide stable, comparable, and consistent test results. Key benefits to DSM from using Q-Lab testers are happy customers, as well as a more robust and trustworthy test programme that now gives them an effective tool to reduce risk and make better decisions. DSM sees the cost of weathering testing as a small investment compared to the risks of not testing, which aligns with Q-Lab’s philosophy that “you can’t afford not to test."

Contact us for more info or to start a conversation on the topic!