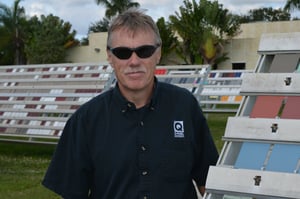 Q-Lab is proud to announce that Michael Crewdson, Technical Director for Testing Services, has been honored with the Award of Merit by ASTM International. This prestigious award, which includes the accompanying title of Fellow, is ASTM’s highest recognition for individual contributions to developing standards. Mike was recognized by ASTM’s Weathering and Durability Committee (G03) for his outstanding contributions and leadership, with a strong commitment to the improved test standards development for the weathering of materials.

An ASTM International member since 1983, Crewdson has previously been recognized by ASTM with the Henry A. Gardner Task Group Chair of the Year Award (1997), the Frank W. Reinhart Award (1999), and the Award of Appreciation (2014). Gary Cornell, Q-Lab’s Global Manager of Standards, Quality, and Calibration, notes that “Mike has been involved with numerous ASTM committees over the years and has chaired many sub-committees.  Mike was also one, if not the, founding father of some early G03 subcommittees, and his contributions to standards work go far beyond just G03.” In addition to ASTM International, Crewdson is a member of American Association for Laboratory Accreditation, Cool Roof Rating Council, International Standards Organization, Vinyl Siding Institute, American Association of Textile Chemists and Colorist, and Society of Automotive Engineers.